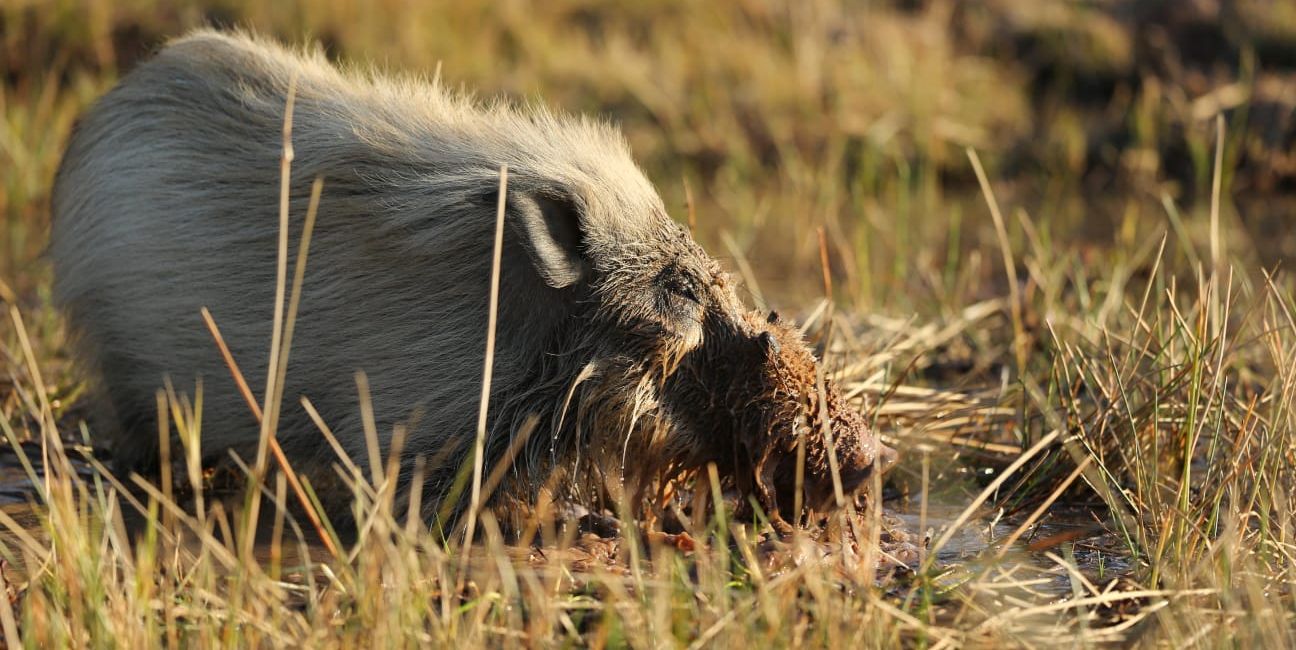 Our students at NJ MORE Field Guide college have come across the Leucistic bushpig multiple times.

Shy and secretive, most certainly one of the less known inhabitants of the African savannah, bushpigs are rarely seen in the open during daylight and at night most experiences with them are fleeting and brief.

Imagine the shock in the eyes of not just a vehicle full of students but also a nearby boat teeming with off-duty guides as we simultaneously happened upon not one but THREE large animals feeding relatively calmly along the banks of the pristine and pure Matlabas River. Initially, the first two acted in a sluggish but deliberate manner, moving slowly from the flooded reeds where they fed into a larger stand of phragmites and disappeared nonchalantly from sight.

The third animal, however, remained blissfully aware but relaxed with our presence and continued munching lavishly on juicy reeds while belly deep in rich chocolate coloured mud. Looking closely at this unperturbed individual revealed a somewhat ghostly blonde glow to its coat and a distinct lack of the deep chestnut tones associated with other members of its kind. No, indeed, this animal was clearly paler and more washed out – and in fact a genuine leucistic Bush Pig. Wow! Not only a prolonged and comfortable view of a member of a normally retiring species but a genetic oddity, a rare variant, a spectacular specialty!

The condition leucism refers to a distinct reduction in the dark pigment melanin and is widespread within the animal kingdom. Leucism has been known to affect many mammal, bird, and reptile species, but is never common. Individuals that show leucism are often at a disadvantage as they are brighter and thus more readily seen by predators – but are not as adversely affected as the albino creatures, which lack melanin completely. The condition itself is a result of a small defect in very few base pairs coded among millions and millions of others that form specific genes, which specify that cells should produce a certain volume of melanin. In order for an animal to be seen as leucistic, this tiny affliction within the impossibly complex DNA blueprint that makes up the genetic code of each cell would undoubtedly have to be received from not just one but both parents, what we know to be recessive. It’s a bit like lightning striking the same matchstick twice.

The marvel of having this blonded surid was not lost on either the vehicle laden with students or the boat-load of jovial guides. The animal remained very comfortable for the fifteen minutes or so we watched it before both groups continued on with the golden afternoon, leaving this marvel of the natural world in peace to continue its meal and join its contemporaries unabated.

Error: Error validating access token: The session has been invalidated because the user changed their password or Facebook has changed the session for security reasons.
Type: OAuthException
Code: 190
Subcode: 460
Please refer to our Error Message Reference.