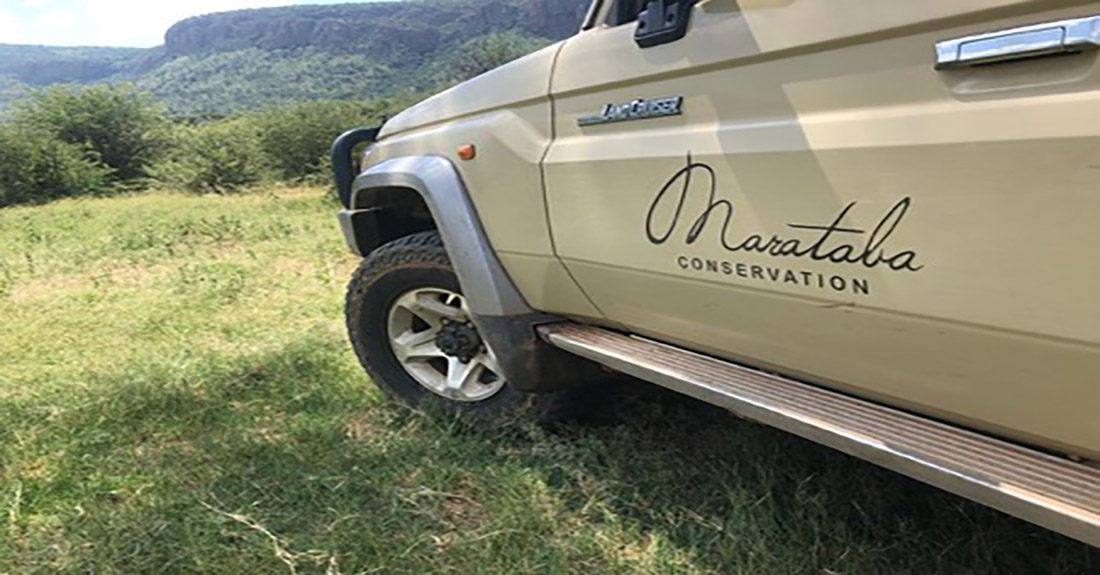 It was with eager anticipation that all 15 NJ MORE students gathered early on a Wednesday morning for their Conservation Management practical module, which involved two days in the field with the Marataba Conservation team (MPCo).

As the 25,000ha Marataba section of the Marakele National Park is privately owned and managed, it is the responsibility of the MPCo team to maintain the reserve, including fencing, roadways, water sources, buildings, wildlife stocks and invasive plant species.

While everyone was excited to get out of the classroom and into the reserve, no one knew quite what to expect from this module. What was to follow was two long days in the hot sun, plenty of learning, coupled with equal amounts of holding on for dear life, dodging branches, carrying rocks and laughs along the way.

After departing camp and arriving at the MPCo workshop facility, the students were met by Driekus Buys, Operations Manager of the Marataba Conservation team, who began the day by giving us a comprehensive rundown on the primary activities of his small but busy team.

This was followed by a tour of the workshop area to show the various tools and implements used in carrying out these objectives. This included explanations on various water pump equipment, erosion control matting, game transport cages, as well as mulching, ploughing and grading devices.

With the intro complete, we then set out into the reserve to see some of their conservation activities being put into practice. This included a visit to the various predator and elephant bomas, where animals are kept in isolation from the general park area, either when being introduced into the reserve, or prior to being translocated to another reserve. 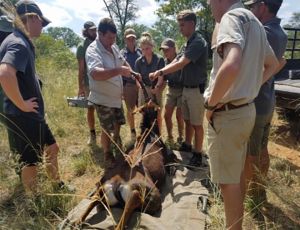 As the team stopped for a quick morning coffee break, Driekus received an SOS call from the LEO Africa volunteer monitoring team who had managed to get their vehicle stuck in the Matlabas River. After grabbing some additional supplies from the workshop, both vehicles headed out to the scene.

What transpired on arrival was one of the finest displays of preening you’ll ever see, as the students realised that the LEO volunteers were an almost exclusively female group. Shirts were tucked in, hats were straightened, beards were tidied and chests were puffed out. One could almost believe that the stranded vehicle could be removed from the river on the basis of pure testosterone alone.

However, the task proved more complex than that, so after much pushing, pulling and winching, the vehicle was finally freed from the clutches of the river, and the LEO team were free to continue their wildlife monitoring tasks. The students then formed a human chain to place dozens of rocks into the river crossing point to rebuild the roadbed and hopefully prevent other vehicles from becoming stuck in future.

After this excitement, it was time for a lunch break before continuing with a tour of the conservation team’s various activities, including erosion control measures, land rehabilitation and bush encroachment management.

After a hot, dusty day, the team was rewarded with a well-deserved and greatly appreciated dip in the river before returning to the workshop for a debrief, and the promise of some more hands-on activities the following day – most likely bush clearing or shifting rocks.

Back at the college that evening, however, as people dragged themselves off to bed after dinner, exciting news filtered through from the conservation team. A Thabazimbi-based helicopter had become available at the last minute, so a hasty plan had been put in place to embark on some aerial game capture the following morning.

The next morning, after a short drive from the college to one of the neighbouring game farms, the helicopter arrived from the southwest and the team quickly swung into action. The target for the day was to be some prime sable antelope, with the first breeding stock sale of the season occurring in a few days’ time in nearby Bela Bela.

With the airborne team spotting some suitable targets and darting them from above, it was the task of the ground teams to race to the spot of the downed animal and load it into the back of the bakkie as quickly as possible, especially if the animal had fallen awkwardly when the tranquillizers took effect. The animals would then be transported back to a game transport truck that was waiting just inside the gates.

This pursuit involved a hair-raising high-speed race through the thick bush, and it wasn’t long before the first casualties began to emerge. Thorny acacias took their toll on the students in the back of the bakkies, and as the first sable antelope was delivered to the truck, several students were seen sporting healthy scratches to arms, legs, and in Loredana’s case, some prominent slashes across her forehead.

After a large male kudu was added to the collection, activities then shifted to the other side of the reserve, where several breeding farms were located. The target again was sable antelope, and with instructions flying thick and fast from the team in the helicopter above, vehicles raced frantically around the property collecting the darted animals and returning them to the truck. The students were now savvier after their early injuries, so further war wounds were few and far between.

With people starting to wilt and many sunburnt faces beginning to appear, we took a quick trip back to base for everyone to demolish their packed lunches. This trip was not without misadventure, as William ‘Birdman’ Tarpley took his love of birds to the next level when he was struck full in the face by an unknown winged creature while standing in the back of a moving bakkie. 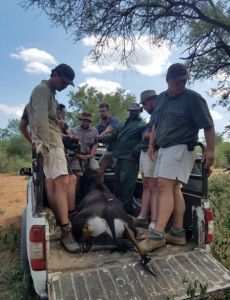 Eventually, a somewhat refreshed and revitalised team of students then headed back to the workshop where Driekus continued his tour of the MPCo facilities, this time focusing more on the breeding farms and their operations and how the revenue from these operations helps to fund the conservation activities within the reserve itself.

A big thanks have to go to Driekus for allowing the NJ More students to ride along with him for the two days and for sharing his considerable passion, knowledge and experience of conservation in his own unique, engaging, humorous and educational way.

Error: Error validating access token: The session has been invalidated because the user changed their password or Facebook has changed the session for security reasons.
Type: OAuthException
Code: 190
Subcode: 460
Please refer to our Error Message Reference.